Please Don't Drool On The Quilts 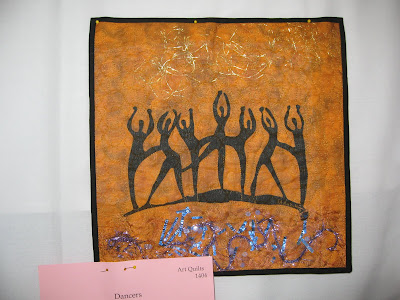 One of the biggest treats for those of the quilty persuasion in these parts is the West Pasco Quilters'Guild Show. It is held biennially [with a nod to Suse for setting me straight!] 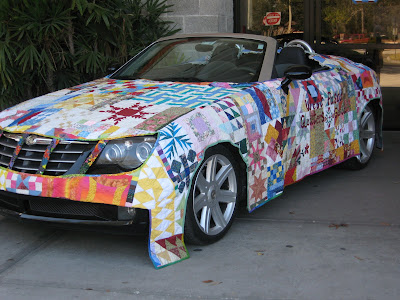 Anyway, guess where I went on the weekend? Excellent guess! To the West Pasco Quilt Show of course. Over the years I've honed my technique for making sure I see everything when I go to one of these shows.

First I get a choke hold on the programme so it doesn't float away.

Then I approach the first quilt that catches my eye and examine it from various angles, including, but not limited to, up close. When my eyes have drunk their fill [or others, impatient for me to move, jostle me on my way] I carefully tick it off in the programme and proceed to its next door neighbour. 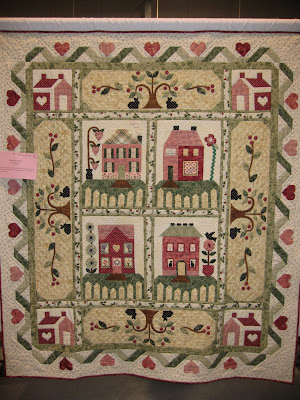 [I can't resist quilts with houses and appliqued flowers, like this one.]

The goddesses of quilt shows have no rhyme or reason to the order in which they hang the quilts. Or so it seems to me. It would be nice to go smoothly from number one to number two to number three.....But no! Willy-nilly seems to be the preferred method. 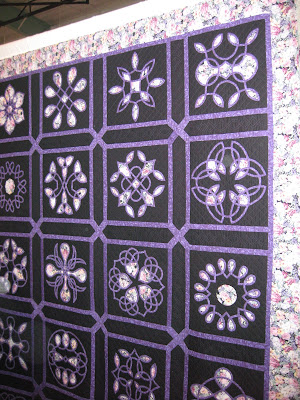 
Which is better, I guess, than having all the appliqued quilts clumped together. That way, even if you have no interest in applique, you're going to see some anyway, because they'll be sprinkled around among all the others.

[This is what, I think, is called thread painting, something I could eat more easily than do, but I liked the blueberries-beads-since I have an enthusiastic blueberry grower in my family!]


The only problem is having to switch pages at every quilt, while hanging onto your purse, making sure you keep track of your camera, keeping the death grip on the all-important programme, making small talk with all the people you meet, and enduring the mortification of not remembering names --- "Well, hello there! I remember you! I took a class from you at the blah-blah quilt shop, way back when the earth was young! How are you?" [you really want to know? Suffering from profound amnesia.] 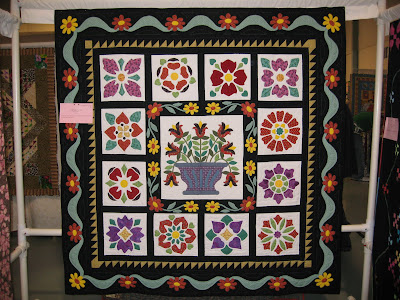 And fumbling for your phone in the depths of your purse when the friends you came with are wondering where you've vanished to.....Fun times! 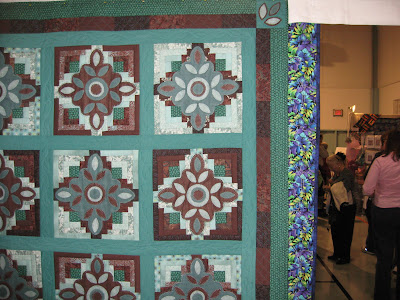 [This log cabin quilt had wool applique blanket stitched over each block. Very unusual and gorgeous.]

This next quilt was my favourite. I voted it Best of Show. My picture of the whole quilt came out very blurry, so instead, here are some detail shots. 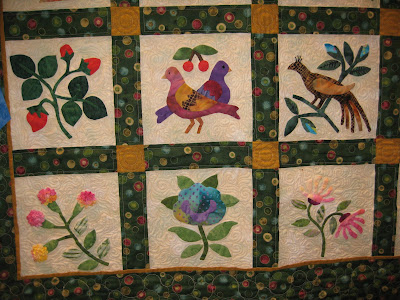 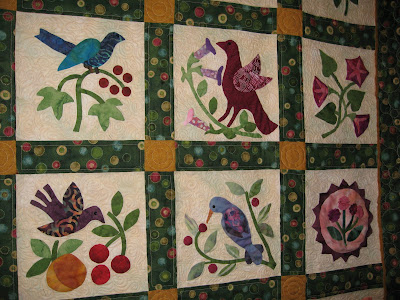 If someone had told me I could take home one of the quilts in the show I'd have taken this one....... 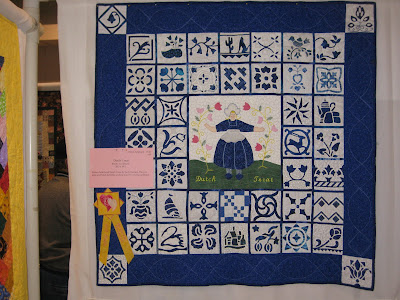 [I have the book for this delft quilt. It's on my list to make before I die!]

Or this version of the Dear Jane quilt..... 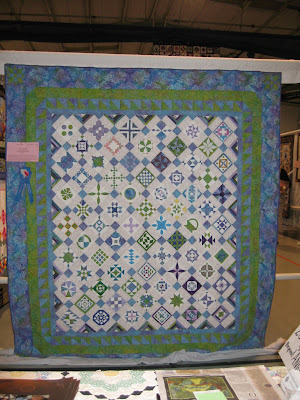 [These little four inch blocks are an ideal project for toting around in your purse for when you're stranded without a book miles from home. That never happens to you? Oh.]

There were a gazillion quilts to see. I think I saw most of them. The quilts I've shown here show my applique leanings, but there were lots of beautiful pieced quilts too. Hope you've enjoyed the show!
Posted by molly at 3:51 PM 16 comments: Saturn I
Originally uploaded by fire starter 100
I couldn't find my Blistex anywhere and the thought of a month without it was stressing me out. Paper lips don't work for me. And they have been dry with this unusually cold winter we're having. Not to mention, everyone else was ready for liftoff. People were getting irate with me. Even my friend was already on board and yelling in exasperation for me to hurry up.

But I had to find my Blistex!

There'd be no opportunity to go to the store and buy more where we were going. And the thought of being Blistex-less for a full thirty days didn't bear thinking about. My lips would surely fall off. I ran back and forth like a headless chicken, pulling out drawers and reaching to check on high shelves, places where I was not remotely likely to find the familiar little white tube. But I'd already ascertained that it wasn't in the side pocket of my purse, where I usually keep it; it wasn't in the pocket of the pants I'd worn yesterday; not in my jacket pocket either; it wasn't on my night table; it wasn't on the kitchen counter; it wasn't on the table by my computer. Where in creation had I put the darn thing? I felt hot tears pricking my eyelids and my feet twitched in a jig of frustration. It didn't help that the shouts from across what seemed like a barnyard, were becoming more strident. Panic rose in my throat as I looked wildly about.

"Molleee! We can't wait any longer!"


They must have left without me because, when I woke up, I was warm and snug in my bed and there was no spacecraft in sight.

Just a moment. There's someone at the door.

Oh. It's a couple of men in white lab coats. They told me I should come with them.........I told them to hang on a minute, I'd be right back. So, quick. Before I climb out the back window and make my escape, what do you think it all means? Am I really so disillusioned with life I'd rather be on the moon? Do they have fabric there, I wonder? And books? And chocolate? And warm, cozy beds?

Maybe I can get on the next launch....

How To Fill Up A Weekend

No divorce proceedings yet! The OC is a kind and generous person but does not suffer fools gladly. All he wanted was to be done with airports, get home, put his feet up, do his crossword and sleep on his own pillow. Not so much to ask. But then a fool intervened, checked the wrong flight, and Voila! He got a bonus hour to enjoy airport ambiance. But, one's own bed, in one's own house, a weekend game of golf, albeit in gloomy, gray rain, a walk in the nature preserve, and not having to shave for a few days, have wonderful restorative powers. He is rested and refreshed. And gone on another trip. And, most importantly, the number of his return flight is chiseled on the inside of my forehead.

It was a good weekend. In spite of miserable weather, to which we are not accustomed in these parts, this time of year. [Is that my daughter I hear, playing a mournful tune on her tiny violin?] How can it possibly be Wednesday already? I think the gray weather, carrying over into the early part of the week, made it seem like the weekend had been extended.

Anne Tyler held me hostage with her latest book, "Noah's Compass." She drew me into the lives of her perfectly ordinary characters, to such an extent that I had to finish the book before anything else got done. And then I had to go to the library and rummage through the shelves to find another Tyler fix....

......which I am trying to hold at arm's length until I finish "Pomegranates" which, while interesting, does not carry me along so effortlessly from page to page as Tyler does.


I found a new recipe for Irish soda bread.......We polished it off in record time. Definitely a keeper!

And a project to sew on while listening to the rain spilling down outside......

I've had this cream floral fabric for more than a year. My sister-in-law bought it, but since she mainly buys fabric, then fondles it now and again, but rarely makes anything from it, I volunteered to make something for her. That something is a table runner. Which I started at the weekend. And could, with luck, finish by Friday! [Another manifestation of the New Me, the one who finishes things!]

I'm not too sure I like it. That mauve-y-lilac-y-purple-y colour seemed perfect when I bought it. And the purple with the sparkle in it serenaded me from the sale shelf at the quilt shop. I seem to have an affinity for purple. Maybe from the purple cloth that covered all the statues in church, during Lent, when I was growing up? Or maybe white hair and shades of purple just go together? But purple has a bad reputation. My Bulgarian friend, Julia, told me once, that, in Bulgaria, purple is the colour for practitioners of the world's oldest profession, for which I do not have an affinity. After she told me that, I dressed very conservatively for our weekly voyages of exploration into Brussels! And then there's another dubious connection. Purple prose. Of which none of us would want to be accused.

Now I'm wondering if these two fabrics take the table runner out of the "demure lady" category, which is certainly descriptive of my s-i-l, and move it into "tart" territory, which would not suit her at all. I no longer trust my own judgement. That lilac/lavender/mauve has been luridly leering at me since I started. But, I am not ripping it out now! If she doesn't like it she can give it away, donate it to charity, or use it to wash her car. I started it, so I will finish it!

It has progressed to this stage: 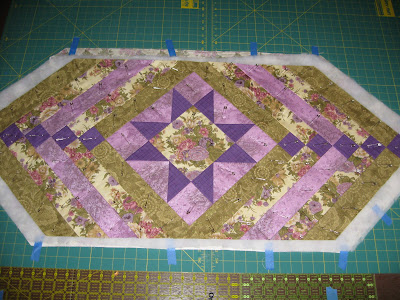 Layered and pinned. After that there's only one more dilemma---to bind it in the sparkly purple? Or the more demure green? Or.....maybe two dilemmas......Which brothel to donate it to if the finished product is indeed too "tarty?"

If you'd like to weigh in on the matter, I'm all ears! But hurry. I want to get it finished before my next run to the airport!
Posted by molly at 12:22 PM 23 comments: