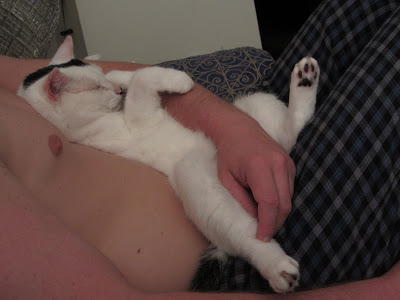 My suspicions were first aroused when she dragged a suitcase out of the closet and set it, open, on the floor.

"Oh, oh," I thought. "This does not bode well. This smells to me of Going Away!"

Now, I am a reasonable cat, but a creature of habit. I dislike disruptions to the normal rhythm of my life. Experience has taught me that suitcases on the floor, smelling of Going Away, are forerunners to disturbing disruptions.

From my perch on the bed I watch her antics with a jaundiced eye
.
"What should I take, Casper?' she asks me, distractedly, rummaging in the closet.

"Is it going to be Springy, (pretty chilly by Florida standards,) or still bloody freezing ? Should I pack jeans and fleeces, or T-shirts and capris, or boots and a woolly coat ?"

I lift one eyebrow.

"Oh, you're right," she says. "I don't even own a pair of boots! My closet is not bloody-freezing friendly!"

I maintain a haughty silence. She is not going to draw me into conversation about Going Away in an effort to assuage her guilt. Being a more evolved species, I don't have to worry about what to pack, if and when I go away. I'm always perfectly dressed for any occasion, whatever the weather.

"Oh, come on Casper!" she says coaxingly. "Don't sulk! You'll have a lovely vacation down at school with the Bean."

While it's true that I love chilling with the Bean (he's my best bud), getting to his place at school gives one pause. Usually they have to play a trick on me. They open the window in the small bathroom, where I love to sit on the sill and spy on the birds, and after I'm lured in by the birdsong, snap! They shut the door. Too late I spot the cat cage on the floor! Tricked! I am then unceremoniously stuffed into this cage and carried to the garage. My wails of protest go unheeded....

"Oh hush your noise, Fuzzy Britches," they say, "You know you'll love it when you get there!"

And I do. I love nothing better than sitting nearby while the Bean studies for some exam or other. I purr in solidarity as he mutters darkly about professors, and quiz grades, and some qualification they all have---Piled-Higher-and-Deeper, I think he calls it. It's all Greek to me. I just purr to let him know whatever the battle, I'm on his side. And then there's the scratching and the wrestling, which I always enjoy, and sorely miss when I'm at home and he's at school.


She's the kind of packer who works better under pressure. So she decides to suspend operations. She has now decided to let the packing question marinate in her brain juices while she sleeps. But first a cup of cocoa. Somehow that always seems to calm her.

"And anyway," she says to me, as I follow her to the kitchen, hoping to guilt her into an extra helping of kibble, "We've all seen the OC pack. Five minutes, tops! If he can do it so can I!"

Absentmindedly, she pours some kibble into my bowl, though not too much (she's always worrying about my waistline.) I arch my back, curl my handsome (if I do say so myself) tail over my head, and head butt her leg as gracefully as it is possible to head butt some one's leg, and finally she remembers and bends over and scratches me behind the ear. Then I turn the other ear and lean in, to maximize the benefits of this little service I have trained her to provide. Then, satisfied for now, I turn my attention to the kibble.

At least I can look forward to some entertainment tomorrow as she scatters around like a mad woman, flinging random clothing items into the suitcase at the last minute and scattering out the door, in a scramble to get to the airport on time...... While I spit and hiss in the back of the Beanmobile on my way to what I know, after I get there, will be a nice change of pace, hanging with my Bean every day for a whole week. Ah bliss!

Now, if only I had opposable thumbs so I could shove that suitcase under the bed, and  not have to fret all night about the tricks that will be played in the morning!

* With apologies to Judith Viorst.


A few mornings ago I woke up late. I had set the alarm for p.m. instead of a.m. Drat! Leaped into my clothes, brushed my teeth, dragged a comb through my hair and galloped out the door.

It was a less than auspicious start to the day. Had I had access to a crystal ball I would have blown work off and crawled back into bed. No crystal ball though, so off I went. Started to reverse out of the driveway, heard a sickening crunch and, too late (much too late, though only a millisecond) realized the Bean's car was parked just behind and to the right of mine.

Got out to have a look. It wasn't pretty. One millionth of a second for one moving object to meet another, immovable object. So much damage in so little time, to not only one, but two vehicles.

And me without a rewind button.

Some wag asked later in the day

"So, how many glasses of wine had you had?"

Maybe if I'd taken the time for coffee I'd have been wider awake. If ifs and ands were pots and pans.....Sigh.

Through tears of anger and frustration I decided I'd go to work, deal with it later. The damage to my car was the lesser of the two.  It was still fit to drive.

Left a note for the Bean. Preferable to telling him in person. Courageous I am not. Not, at least, in the matter of announcing that I have done horrible, needless damage to your car. Neither was I looking forward to the daily call from The Man In England. Meanwhile, I would go to work and not have to think about it right away. Except for the five hundred times throughout the morning that I heard again in my head that sickening "Crunch!"

As it turned out, The Man In England was indeed less than thrilled. As you are when told such news.

There was some growling. Several abrupt questions, and many sharp intakes of breath (breathe J, breathe.)

The silence stretched out, across the miles, all the way over the wide Atlantic, flying low over the emerald fields of home (where I would have liked to be, in a little cottage by the sea, and all of this merely a dream) and on over the Irish Sea and along to the hallowed halls of Oxford where it came to rest in the ear of The (angry) Man, listening expectantly, while I racked my brain for a satisfactory answer to whatever impossible question he had asked. Generally speaking, he longs for me to be silent. Silence, in this instance however, was the wrong answer. At that moment there was no such thing as a right answer. I hung up the phone feeling very much like Lowly Worm.

The silence persisted throughout the next day. My dilemma: Call the insurance company? Or just take the cars to be fixed and leave the insurance company out of it? I'm a good driver, despite very recent evidence to the contrary, but I have never learned the finer points of automobile appreciation. If it has four wheels, an engine and takes me where I want to go, I'm happy as a clam. Which isn't a problem until something goes wrong. Then my brain switches to la-la mode. I was pretty sure the MIE would want to leave the insurance company out of it. All they'd do would be to hike our insurance rates. But Lord! How much damage had I done? Could we afford to just absorb the expense ourselves? Through the email gods I asked for guidance.

And then, not wanting to be home for the daily phone call, being somewhat allergic to the prospect of feeling, once again, like Lowly Worm, I went to yoga. Surely all that breathing, stretching and zen-itude would give me fortitude.

Meanwhile, the Bean had found alternate means of returning to school. Throughout the whole fiasco he had held his tongue, stiff upper lipped. I think he managed it by clenching his jaw. Hurting a guy's car is cutting close to the bone, though I rather think he was relieved that, if it had to happen, I was the perpetrator, rather than he. It's been long established that I am not the perfect wife, so I have less to lose.

Funnily enough, nothing happened during the night, as I had madly hoped, to make the dents disappear. What should have been smooth and shiny was still crumpled and glum next morning.

The email gods sent word that I should get me to an auto body repair shop for estimates. I spent the day up and down the highway, getting lost, over-shooting my mark, back tracking, finally figuring out where the body shop was. First with one car and then with the other. And one more estimate to go tomorrow morning.

I had never even driven the Bean's car before. So it was with trepidation that I sat into it this afternoon and prepared for take-off. He was at school, swotting for a chemistry quiz later in the day, and sweating at the notion of his inept mother driving Miss Daisy.

"Be gentle, mom. Don't do anything else to hurt my car," he whispered hoarsely into the phone.

Turns out it wasn't rocket science after all. Even though the impression is of a rocket when he's driving it. I still remember how to drive a stick shift. Though I did have to go back in, hat in hand, to the mechanic and ask him how to put her in reverse.....She is safely back in the driveway now, resting peacefully. Gathering strength for further adventures tomorrow

And me? I'm ready for that cottage by the sea. The one with the riotous flower garden and roses climbing over the door; a lazy spiral of smoke curling up from the chimney; the smell of soda bread wafting out the half door. And not an automobile in sight. Just the old, green, leg-powered jalopy, leaning against the garden gate in the afternoon sun.

A girl can dream.