We Are Made of Memories

Note: I've mentioned here the teetering pile of unfinished quilting projects. Turns out that's not all. There's quite a supply of half done blog posts piled up also that, for one reason or another never made it to "publish." So since inspiration is (temporarily I hope) in short supply here's one of them.

Imagine if you woke up tomorrow and didn't know where you were? Looking around from amid the crumpled sheets you didn't recognise the room or the furniture or the pictures on the walls? Even though you've been sleeping in this room for more than a decade?

I recently finished a fascinating book - "Patient H.M". It's a story about the history of lobotomies. Not the kind of book I'd normally pick up but the OC read it and pushed it my way so I read a little bit, and then a little bit more, and soon I couldn't put it down. The author, Luke Ditterich, is the grandson of the doctor who performed thousands of lobotomies back in the first half of the twentieth century, even though a form of the procedure was in use as far back as ancient Egypt. In many instances lobotomies were considered a successful treatment in that they made patients in mental asylums more tractable - remember One Flew Over The Cuckoo's Nest?

Thankfully, we don't poke around with metal objects in people's brains to make them more manageable anymore, even though the doctor in question continued to perform them into the fifties, sixties and early seventies. He was a pioneer in studying the human brain but, in the opinion of some of his contemporaries, a little too eager to take advantage of the ready and captive supply of human guinea pigs in the mental hospitals where he worked, whereas another of his fellow doctors/researchers cautiously confined his efforts to chimpanzees.

As a result of a lobotomy performed on him as a young man by this Dr. Scoville, a patient named Henry became the most studied case in the history of psychosurgery. After the surgery he could remember partsof his life before it, but could no longer form memories so that, when tomorrow came, today was not just a distant memory but a non-existant one.  If you met him today, and spoke with him, he would be friendly and chatty but, if you met him again tomorrow, while he would still be friendly and chatty, he would have no memory of having met you or spoken to you and would act as though he was meeting you for the first time. And that's how it went for the rest of his life. Because he and his brain were so exhaustively studied, Henry, without ever planning to, or benefitting from it, made huge contributions to our knowledge of how the brain works.

Who we are today is defined by all the people, places, things, experiences, friends, thoughts, books and conversations we've known, met, been to, done, gone through, had, read....and on and on. If this whole messy blackboard of our lives were suddenly wiped clean who would we be? What reason would we have for climbing out from among those rumpled sheets each morning to face a new day, in a strange place, among people we did not recognise?

The author, Luke Ditterich, had a vague idea, growing up, of what his grandfather did but it took him a decade of research, and persistant digging into the past, to uncover the whole story. The book is as much about his personal family history as it is about his grandfather's most famous patient. And that history is itself fascinating. Ditterich is a journalist first and foremost and his writing flows smoothly back and forth between the past and his efforts in the present to uncover it. We are reminded again how human even the most dedicated scientists are and what a struggle it sometimes is for them to remember that the patient is a human being, not a lab rat. Having power over others' lives tempts some to play God. Look around you in today's world....

When I finally closed the book I had a fuller appreciation than ever before for what a gift it is to be able to remember. To look at a photograph like the one above and be instantly back there, on the strand at Ballybunion, feeling the sand between my toes, the salty sea air blowing through my hair, building sand castles with my friend and my little sister, seeing again the jellyfish that sent us, just moments before the picture was taken, shrieking and laughing out of the waves.

As long as we have a functioning memory we can call to mind people we have known and loved, and maybe lost - but not entirely as we can still see them in our mind's eye; happy times and sad; remembered conversations, places and events that formed us.

I hear and read all the time that we should "live in the moment," and I agree, but how much richer that moment is when we can remember all the layers of memory that brought to it.

That said, the old grey mare 'aint what she used to be! An excuse I find myself using more and more frequently is "the memory is the first thing to go!" But at least it's going gradually and not because anyone with a God complex has punched holes in my brain. 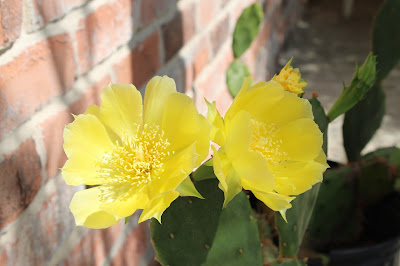 Ah, crepitus, he said, nodding sagely and listening to the snap, crackle and pop of my knees as he bent them back and forth. The doctor had sent me to physical therapy and the first thing I learned there was a new word.

Hmm, I thought. Crepitus. Maybe not entirely new.  The word had a vague, déjà vu ring to it.
Any relative of decrepit?  I wondered aloud. He laughed.

Actually yes, they both come from the Latin, crepitare.  Aha! And Sister Margaret thought she’d lost me at “ut.” I was fine with amo, amas, amat, declining verbs, struggling to translate(badly) the works of long dead ancients but crepitare? Not so much.

But you’re not decrepit. I think he could have sounded a little bit more convincing…

Crepitus means rough, he went on.  It happens when cartilage wears down and causes the bones to grind together (the sound track of my life.) It’s quite common in sexagenarians, he continued blithely as mere quinquagenarians are wont to do.  Seriously? Was that supposed to be comforting? He was starting to sound like Charlie Brown’s teacher. I struggled to focus, to tear my attention away from the devastation of being referred to as a sexagenarian, and focus on absorbing all of what he was saying.

It didn’t work. I was already away, back on the beach at Lahinch, twelve years old, leaping like a Spring lamb from rock to rock, barefoot in the sunshine, glorying in my surefootedness, blissfully unaware that it would not always be so.
This should partially explain the large gap between posts – I’m reeling from the discovery that I am officially a sexagenarian. Had I thought about it I’d have realized it years ago but I didn’t. Denial perhaps? Or an aversion to labels? Not only that, but, in spite of the physical therapist’s assurances to the contrary, well on my way to decrepitude.

On a cheerier note we have a cactus plant in a pot that usually looks, well, decrepit. Until last week when it burst into glorious bloom. 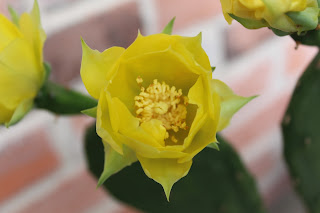 Up next (in a couple of decades) - the lowdown on how it feels to be an octogenarian. Don't know about you, but I'm in no hurry. Meanwhile, if a decrepit looking plant like our prickly pear cactus can spontaneously burst forth in breathtaking blossoms, this sexagenarian blogger might still occasionally burst forth with a blog post, crepitus notwithstanding.
Posted by molly at 2:13 PM 13 comments: